If someone asked you to define Bravery what would you answer? Probably something like “Being brave means you take risks without being afraid.” Which might be a fine definition, but I think its missing something.

When I left a Full Time job with benefits, to start my own company lots of people thought I was being brave. I didn’t really see it that way, and still don’t. For me it was the next logical step in a career where I was constantly working for companies that had shrinking IT needs. Or they were showing signs of instability. I’ve been laid off once before, and I’m not willing to put my livelihood into the hands of someone else.

In the last few years as my kids discovered a love for Thomas and Friends. My daughter Molly’s favorite Engine on the Island of Sodor is a funny looking one called Gerald but he goes by the nickname “Gator”. 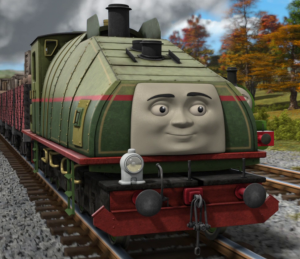 You need to know a few things about Gator.

That’s right, the creators of this series designed and built this character with a flaw that directly opposes what he is supposed to be used for. Sound familiar to anyone? I meet IT admins all the time, who are good at what they do, they love it and would say it’s what they’re supposed to be doing. Yet they are often crippled with fear of the “what if”. What if even though I tested something, I deploy it in production and it takes down the whole company? What if my company gets hit with Ransomware and we can’t get important data back? What if we have a disaster and over recovery plan has a flaw because we didn’t test it properly? What if I’m not as smart as every one in the room thinks I am, and they figure me out? This last one known in IT circles as “Imposter Syndrome” is becoming a large issue for IT people. See my friend Cody De Arklands great blog post for more on this.

Here’s what happened to Gator. He was carrying a load up a mountain side for the first time. He got to a bridge high in the air and suddenly was terrified that he had to cross it. He then gives us the best description I’ve ever heard for what Bravery really is. I have to quote him directly. “One day I was faced with having to cross a high bridge, higher than any bridge I’d ever seen before. But I was pulling trucks loaded with important supplies, the villagers needed my help! I decided I must be Brave! It took everything in me to cross that bridge, but I did it even though I was scared. So you see being brave isn’t the same thing as not feeling scared, being brave is about what you do even when you do feel scared.”

Being brave is about what you do even when you do feel scared.

Maybe I’m just a simple thinker, but this definition of Bravery carries so much weight and truth. I hope it helps you the next time you find yourself about to cross that high bridge of whatever you’re afraid of. Remember Gators method of Bravery.

Make the decision to be brave, it’s not something that happens by accident. I promise if you do, you’ll come out the other side, and everyone will notice you’re different and better for overcoming it.

Blogtober #2 – Show Up – Leadership lessons from our kids TV shows

I didn’t grow up watching a lot of Sesame Street. My kids have though and overall it has its moments of good and bad segments. One in particular has stood out to me though with another simple truth we Adults seem to miss or forget on a regular basis. Showing up.

Grover the lovable Blue Monster on Sesame St. Has an alter ego as Super Grover 2.0, an upgrade from his former days as just “Super Grover”. He can’t really fly, he has no real Super abilities, he often solves problems by accident, and he constantly makes mistakes. He does four things.

There is one big last thing he does and  Sesame St. makes a big point of this,

Super Grover 2.0 even with all his failings still arrives when he hears someone in trouble. He does his best and most of the time he doesn’t solve the problem. He does though bring about the circumstances by which the problem gets solved. Simply because he is present and willing to give it his all.

So even if you don’t have the talent or the resources or the connections. Don’t throw in the towel and phone it in. Show up! Do your best, and be there for others. Even if it’s not something you can fix sometimes just being in the room is enough to get the right person going in the direction towards a resolution.

It’s #Blogtober season. So here’s my first attempt at this. I want to highlight some simple leadership and life lessons learned from watching today’s Kids TV shows.

It seems to me that today we Adults over complicate everything we do. Especially our professional relationships. If you lead people here’s a few thoughts on leadership from some real experts.

My daughters started watching this Netflix series and I was completely blown away in the first 60 seconds of the first episode. Brave Heart Lion comes on screen and immediately lays out the mission, makes sure they’re properly equipped, encourages his team and reminds them WHO they are.

This is leadership 101. If you’re leading a team meeting this coming week, I challenge you to find 60 seconds at the beginning of your week to follow Brave Heart Lions formula.

1. Remind everyone what the mission is

2. Check that everyone has what they need

3. Encourage and build them up

4. Remind them who they are and how important their role is

Its really is that simple.